The web needs its own App Store 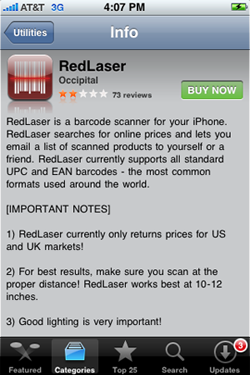 I've been thinking a bit about the Apple App Store recently, perhaps because I'm starting to think more about developing a mobile application that will complement my site.

One of the amazing things about the App Store – perhaps the most amazing thing – is how easy Apple makes it for users to pay for apps with small amounts of money (micro-transactions, if you will). Are you a developer that wants to sell an application for just $.99 a pop? Easy. Just create your app, submit it to the store, and start earning money. You don't even have to worry about going the advertising route. The strategy instead is primarily about providing a free version of your app that then gets users warmed up for your paid version.

Apps in the App Store aren't that different from web apps. They are both internet-enabled at their core and provide rich communication and data retrieval services for their users. Sure, iPhone apps run in Objective C instead of Javascript, etc. But that doesn't matter to the regular user who decides to pay for an app on their iPhone. Both are apps either based, or quickly retrieved, from the cloud.

One of the problems that most internet startups face is the looming question of "how the hell am I going to make money on my site even if it becomes successful?" The internet industry is often mocked because it doesn't readily provide dependable answers, at least not ones that are not easily undermined by general economic factors.

No web developer wants to deface their sites with Adsense or banner ads. Online advertising is (with few exceptions) anti-consumer and difficult to do "right" (as in, design to really capture users' attention and generate modest rates of return). Wouldn't it be great if we could just design sites that sell like iPhone apps?

Imagine visiting a site's landing page, getting a description and some screenshots, and then seeing a button that says "$1.99 for full access". If, as a user, you could click on that button, enter a password, and then immediately have lifelong access to the site – I bet you'd do it. $1.99 is a price lots of people are willing to pay, even if there's a risk involved with trying out the site and then finding out you don't like it.

I don't know nearly enough to understand why this hasn't happened, even though I've read a fair amount about how online micropayments for sites have been heralded for years but have never materialized. Apple has made things happen on the iPhone because they've created a closed system that makes it really easy for end users and developers alike. As a user, you give your credit card information to Apple once and they only charge it when it makes sense (since charging every micropayment individually would drive up transaction fees).

Why can't someone do this for the web? It seems to me we just need a company that a) people trust with their credit card information and transactions, and b) knows how to build the right distributed technology that will get adopted by developers. Google comes to mind since it's tight with developers and very trusted among users. Maybe browsers like Mozilla are better situated, however, since they control the "device" within which users browse the internet (just as Apple controls the iPhone). Then again, Google has its own shiny new browser (Chrome) so they'd have that going for them as well.

Such a payment system could revolutionize how websites are monetized - and consequently, how they are made. Businesses and their users would both stand to benefit greatly. Here's to hoping this happens as the web matures.